Located in the southwestern corner of the Ngorongoro Conservation Area is Lake Eyasi a soda ash Lake that gets its waters from the Rive Sabiti. Lake Eyasi covers over 400 kilometers squared and is the only water source for the Hadzabe Bushmen. Lake Eyasi is mainly visited for the cultural experience of the Hadzabe and Datoga people and the bird-watching excursions that are mainly carried out throughout the year. Lake Eyasi is located about 3400 feet above sea level and it is surrounded by palm trees along its shores that act as home to various bird species including storks, pelicans, weavers, barbets, and flamingos among others.

A safari to the seasonal Lake Eyasi will take you to the endangered Hadzabe Bushmen who still live like development is still a faraway dream for them even when the surrounding villages are adapting to the ever-changing world. The Hadzabe Bushmen can be distinguished from the rest by the clicking sound that is made as they speak and the only other people who speak like this are the Bushmen in southern Africa. Lake Eyasi is also home to the Tindiga hunter-gatherer people who unlike the Hadzabe are willing to join and enjoy the more civilized world.

The Hadzabe people are believed to be less than 2000 currently and their numbers keep on reducing which has made them become an endangered species of people. They are the last of tribes in Tanzania that have stayed true to their cultural ways of being hunters and gatherers and they have failed to adapt to the ever-changing world. The Hadza people do not have a specific leader and their consensus is all community based and no adult has authority over the other. There are no permanent shelters and they live in semi-permanent houses which are not secure and when it starts raining, the locals normally seek shelter in the nearby caves. They rarely live a mark on where they live due to the way they live and they have a mantra that says they only live in the present. When they get food, it is consumed that very day and nothing is kept for the next day due to the heat that spoils the food.

The Hadza community is based on barter trade where they exchange the hunted meat and honey with the neighboring Datoga tribe to get agricultural produce. They also exchange the meat for the blacksmith arrowheads that are used in hunting. There has been introduction of different projects by the government to help introduce the Hadza people to other techniques of survival like farming but they have stuck to their old ways which makes them unique from their neighbors.

Lake Eyasi is one of the off the beaten destinations in Tanzania which together with Lake Natron can be included in a long Tanzania safari itinerary to make the experience better.

How do the Hadzabe Bushmen live?

The Hadzabe are a small group of people who live in semi-permanent houses and sometimes bushes during the dry season and when it comes to the wet season, they can be seen getting shelter from the nearby caves. Semicircle beddings made from hides and long vertical sticks match the homes that they live in and the beds are made out of kudu and Impala hides.

Both the male and females are active in hunting although the men mostly do the hunting whereas the women gather the honey and fruits and take care of the home. The women and children prepare the meals that the men bring back from the bush and some of the things that they get from foraging include honey, fruits, roots, and berries among others.

The Hadza use liters of honey and two baboons (big ones) as bride price to get their wives and they are monogamous. The women continue foraging until they give birth since it’s believed that they are supposed to take care of a home and their children.

Socializing in the Hadza community is based on gender and age for example the mother stays with her children especially girls and babies and boys who are 7 years and above are expected to be with the men to help teach them the skills of survival at an early age.

Their way of life is still Stone Age as they make fire by rubbing sticks together, and rarely change their clothes with the women draping colorful wraps around them and designing them with jewelry that is made from porcupines, fur, and hides and the men can be seen putting on animal hides and shorts. They also put on locally made sandals so that they can walk without hurting their feet with sharp stones and thorns.

Why should I visit the Hadzabe Bushmen?

One of the main reasons why the Bushmen should be visited is to learn more about their dwindling culture due to their reduction in the number and to get one-on-one interaction with them. You get to learn how to make fire by rubbing sticks together, how to make jewellery from hides, and how to hunt and collect honey. The tour usually ends with traditional dances and songs and if you wish to purchase any of the items made, you will have to barter trade them with something that you have and not money. 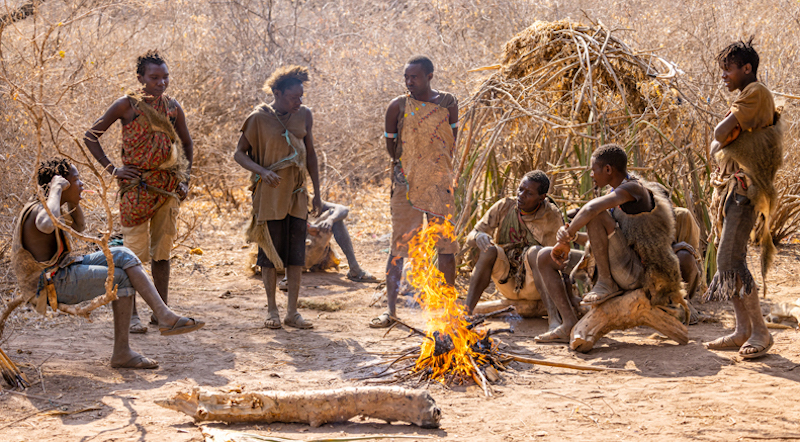 What do I need to know about Hadzabe?

A few facts that you need to know about the Bushmen before your visit are that they use barter trade, their language is believed to be the oldest in the world with a clicking sound, it is the last hunter-gathering tribe in Tanzania, they hunt for baboons, impalas, kudus, birds, buffaloes, and antelopes using handmade spears and they have failed to adapt to civilized living the way they used to 10, 000 years ago. Recently, around 2002, the Hadza Bushmen adopted a few Swahili words and made it their second language to be able to easily communicate with other locals.

A Tanzanian safari to the Hadzabe Bushmen will take you back in time to experience the still-existing ancient culture that is one of the few remaining ones in the world. Take some time off and go experience the one-on-one cultural engagement with the local Bushmen and enjoy the views from Lake Eyasi. The Bushmen can be visited all year round but the best time is during the dry season from June to October when the village roads can easily be accessed and it is also a good time to enjoy the wildebeest migration in the nearby Serengeti National park.