The Great wildebeest migration in Serengeti National Park is the main attraction in the country that sees millions of wildebeests and thousands of zebras, gazelles, Impalas, and Topis migrating from Serengeti to Masai Mara. The migration takes place annually and the cause is a change in the weather which makes the animals migrate to Masai Mara and when the weather changes in Masai Mara, they migrate back to Serengeti and the cycle continues. Serengeti National Park is located in the Northern part of Tanzania and is the most visited safari destination.

Tourists need to book in advance if they want to enjoy the wildebeest migration because of the large crowds that visit the National Park during this period. Proper planning for a wildebeest migration safari starts with contacting a trusted local tour operator and this should be done at least 6 months before your planned date of travel. This will help you get the best deals out of the safari, especially with accommodation facilities.

What is the wildebeest migration?

This is the largest herd migration in the world where over 12 million wildebeests, thousands of gazelles, Topi, and zebras are in a constant cycle movement from Serengeti in Tanzania to Masai Mara in Kenya in search of nutritious and better grass and water. The animals are guided by instinct and a change in the weather in each of the National Parks forces the animals to start migrating using the same old migration routes covering over 1000 km for each wildebeest migrating.

The cycle takes the herd from Ngorongoro Conservation Area through the southern part of Serengeti where they cross the crocodile-filled Grumeti and Mara Rivers into Masai Mara and then back to the Serengeti and the cycle goes on and on. The migration is known as a life and death experience with the young calves being attacked by predators like lions, hyenas, leopards, and crocodiles that are in the Rivers while the animals that are a bit weak drown in the Rivers.

This is the time when the animals after giving birth start to get ready for the 800 km trek through Serengeti to Masai Mara. The short grasses during this period are all eaten up which forces the animals to start moving toward the Grumeti River. There is no actual timing for the start of the migration, but it can start as early as April or early June depending on the rain patterns. May to June is the time when the herds move towards the western corridor and prepare the cross the Grumeti River. Thousands of animals will congregate around the southern part of the bank for over two weeks as they prepare to cross the River where some of the animals will not survive the water and crocodiles. It is quite a sight spotting the animals as they bravely cross the Lake with some crossing successfully, and a few turning back as others lose their lives.

This is not the best time to visit Serengeti National Park for the wildebeest migration because the largest crowd will already be crossing the Mara River to Masai Mara in Kenya. August to September sees many of the animals preparing to cross another hurdle which is the Mara River after crossing the Grumeti River. This normally happens around July or August and this is the most watched part of the wildebeest migration where many of the photos are taken. This is the perfect time for tourists to stay in one of those Serengeti Mara camps since half the crowd is in Serengeti while the other is crossing the Mara River. Some of the animals keep crossing back and forth for no apparent reason. 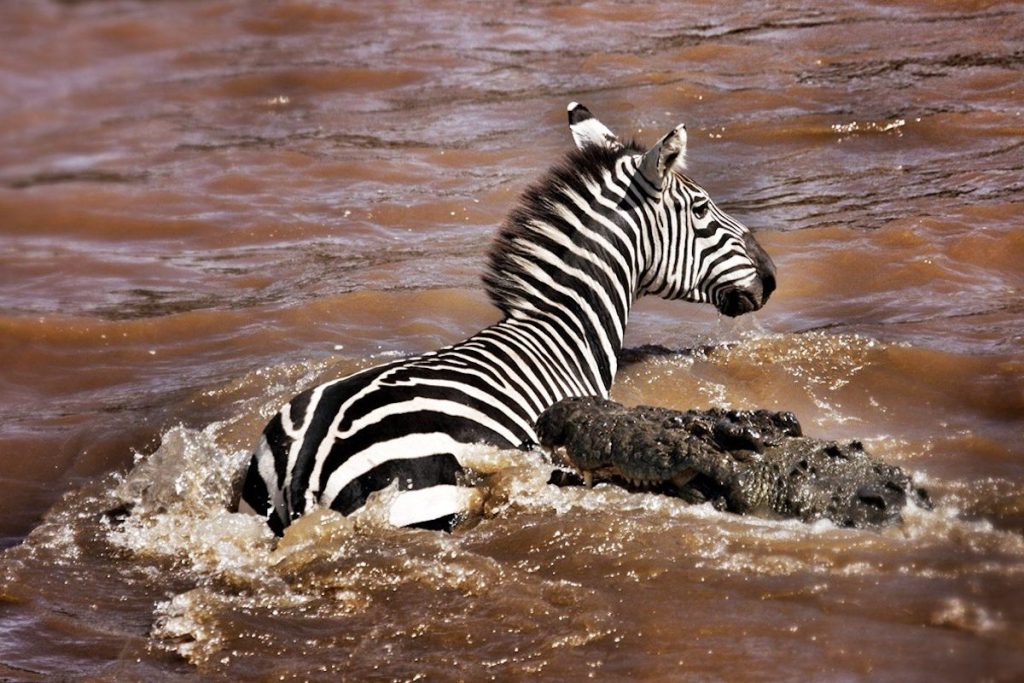 October sees the wildebeest migration herd preparing to cross the River back to Serengeti. The herd normally reaches Serengeti around late November to the northern plains of Serengeti and the least visited section of the Serengeti Lobo Area. The migrating herd will return to the Ndutu area for calving and the migration will start all over again. For tourists looking to witness the wildebeest migration in relative quietness, the Lobo area is the best place to witness this.

This is the best time to see the calving period in the Ndutu area near Ngorongoro Conservation Area. The animals are dispersed all over the place including Seronera feeding on the grass and they stay in the area until the calving season which takes place from January to March takes place. Thousands of calves can be seen during this period and towards April, they start moving northwards.

You need to note that the pattern above is an estimation of what you should expect but the pattern can easily change due to a change in the weather patterns. For example, in 2013, the pattern changed when the rains started in Masai Mara as the herd was migrating back to Serengeti which made them turn around and stay in Mara for more weeks and the same thing happened in 2014 when the rains in Serengeti causing some of the herd to stay back as others continued on their journey.

Where to stay in Serengeti National Park for the wildebeest migration

There are so many facilities where you can stay but we have chosen the best and listed them below so that you get to choose which one suits your needs.

This is a luxury camp that is strategically located in Serengeti and one of the best places for witnessing the wildebeest migration as they cross the Mara River which is infested with crocodiles. The camp is suitable for all types of tourists but for those traveling with children, they must at least be 5 years and above. Sayari camp not only offers first-class views of the Mara crossing, but it also provides tourists with good views of other animals that live within Serengeti. The spacious self-contained luxurious tents offer tourists comfortable accommodation and there is a small brewery that produces unique beers that you can taste as you enjoy the migration.

The best time for viewing the migration at Sayari camp is June to October.

Located at the bend of the Mara River in Serengeti, the Mara River Tented camp is strategically located in the Lamai Triangle, and because of its strategic location, the camp offers excellent viewing of the wildebeests as they cross the River and wildlife throughout the year. The camp is good for families with children above 10 years, singles, and couples looking to have a great time while on a safari to Tanzania. The best time for viewing the wildebeest migration at the Mara River Tented camp is from June to October.

This is found along the banks of the Grumeti River which acts as the first obstacle for the wildebeests as they cross over to Masai Mara. The tented safari rooms each have a private veranda where you can view the animal crossing, self-contained, and the seasonal pools that are near the camp attract a wide range of animals like lions and hippos among others. The camp is favored because of the seasonal pools that attract hippos, it is favorable for tourists and children, the hot air balloon rides that are offered at an extra fee and it offers guests much-needed privacy since there are few lodges in the area. The best time for seeing the wildlife at the Grumeti River Tented camp is from May to July.

The lodge is located in the northern part of Serengeti near the Masai Mara River offering tourists first-class wildlife viewing as they cross the River. The best time for watching the migration at the Kuria Hills lodge is from June to October and some of the reasons why the lodge is a must-see include the private plunge pools, easy watching of the wildebeests crossing the Mara River, private tented suites, and the great views of surrounding the lodge.

This is one of the few permanent camps which is located in the northern part of Serengeti. It is a luxurious 5-star hotel that offers some of the best services to tourists after a long day of watching the wildebeest migration as they cross the Mara River. Its strategic prime location is the first thing that makes it a one-stop Centre for tourists, has spacious tents with private balconies, and not forgetting the good food that is served throughout your stay. The lodge has a hot bathtub and rooms that are well-decorated and self-contained, with clear views of the surrounding areas. The lodge is best for couples and those on their honeymoons and the best time for wildlife viewing at the Bushtops is from June to October.

Constructed on a hill, the Singita Faru Faru lodge has great views of the Grumeti River crossing. The lodge is a luxurious facility that offers services like air-conditioned rooms, large windows that offer great views of the wildlife and the Grumeti River, they offer telescopes to their guests which help in spotting the wildlife easily, watercolors and pencils are provided to tourists who would love to paint and they also offer babysitting services. There is a spa, tailor-made suits, 2 swimming pools, and a fitness Centre. The best time to see the Singita Faru Faru lodge for wildebeest watching is from May to July.

Is this the only wildebeest migration?

No, it is not only the wildebeest migrating but other animals like the gazelles, Topis, and zebras. These move in groups with millions of wildebeests, over 300, 000 zebras, 400, 000 antelopes plus Impalas and elands.

Can I be able to predict the wildebeest migration pattern?

No, the wildebeest migration pattern is not predictable and can change at any time depending on the change in weather patterns. The weather determines when the animals migrate and since it also changes from time to time, it becomes hard to predict the migration.

When to go for the wildebeest migration in Serengeti

The best time to go to Serengeti for the wildebeest migration is during the peak season also known as the dry season which starts late June to October. It’s only in Serengeti that you get to see the calving season before the animals start preparing to trek over 800 Km to Masai Mara.

The best time to watch the calving season is from January to mid-march with the best month being February. February is the peak season for calving and thousands of calves can be seen in Seronera and Ndutu near the Ngorongoro Conservation Area.  The advantages of visiting during the calving season include seeing many calves at the same time, the cost of the safari being low, there being fewer crowds, and it is a prime time for seeing the predators as they hunt down the calves. The disadvantages include rain that disrupts the game drives, lots of mosquitoes and migration pauses so don’t expect to watch the usual large herds moving.

The best time to visit Serengeti for the wildebeest migration for tourists who would wish to avoid the large crowds is November to December and March to late May during the wet seasons.